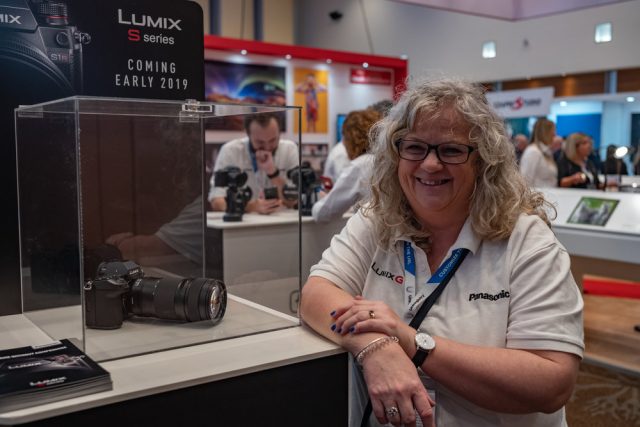 Today visited the photographic Trade Show staged in west London by the Societies of Photographers. Most of the big manufacturers had a presence, including Panasonic.

I managed to see the new full-frame Lumix S1 in the metal for the first time — albeit in the obligatory glass cabinet. Definitely no hands on. I had a long chat with Panasonic’s Carol Hartfree and she confirmed that the two new cameras would be with the dealers by the end of March. We haven’t yet had a full specification although we do know that the cameras will follow the well-established precedent of featuring two sensor sizes. Both cameras are aimed at the professional market. The 24MP S1 will target videographers and stills photographers while the 47MP S1R is intended for higher-end stills work as well as studio photography.

While we have all seen pictures of the cameras, it has been hard to get a good idea of scale. I can tell you that the body is big, noticeably bigger than the Sony A7III or the Nikon Z6. In fact, it looks very much the same size as the Leica SL and is vaguely reminiscent of the SL but with rounded corners and more knobs. I wouldn’t be surprised to find that there has been a degree of cooperation here.

The S1 and S1R will be the first full-frame mirrorless cameras to offer Dual IS where stabilised Lumix lenses and the in-body system will cooperate to achieve up to 6.5 stops advantage. The Leica SL, which is now a three-year-old design, relies on IS in certain lenses but not in the body, so the Panasonic system will have a clear advantage. I suspect, however, that the SL2, whenever it arrives, will also be equipped with in-body stabilisation. There is certainly enough room for it. In the meantime, however, we will have to wait to see if the Dual IS also works with stablished Leica lenses fitted to the Panasonics.

We can also expect great things of the EVF which Carol said would be the best on the market. I suspect it could well be the similar to that in the SL — perhaps a slightly upgraded version but equally large and usable.

Seeing the camera for the first time increased my enthusiasm for the L-Mount Alliance and the greater level of choice it will create for existing SL, TL and CL owners. For the first time we will have a choice of lenses at several different price points. While the Panasonic lenses may not be quite as good as their Leica counterparts, they are likely to be one third of the price, a powerful buying incentive for anyone.

In the past I have criticised the SL for its size and weight. And, frankly, I was surprised that the Panasonic S is seemingly just as large, although it could be a gram or two lighter. However, I am now coming round to appreciate the argument, reiterated by Carol in today’s discussion, that the larger size is a positive advantage. Professional photographers look for a substantial camera which is more comfortable to handle when using longer lenses. The Lumix S is tackling the same pro market as the SL, but there is perhaps room in both manufacturers’ ranges for a smaller prosumer body similar in size to the Sony a7 or Nikon Z.

With the two Lumix cameras and a trio of lenses hitting the market this Spring, we can now look forward to the first announcements from Sigma. We already know what lenses they have to offer, but so far we have no idea of how many of them will be offered in SL mount. The heavyweight, high-performance Art range is certainly high on the list, but the company also manufactures smaller, cheaper lenses that could appeal to SL and TL/CL owners.

I believe we are entering a new era for Leica and its mirrorless aspirations. Far from cannibalising sales, I believe the L-Mount alliance will act as an encouragement and will vastly increase Leica’s potential market. Once consumers get into L-Mount and stock up on lenses, Leica’s cameras will be seen as aspirational and very desirable.

Nobody buys cameras any more: Really? 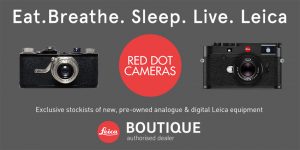